In university, I had a housemate who was incapacitated for two days out of every month while she was menstruating. Lorna* would be in bed during this time, and I recall the four young women and myself who lived with her sympathized, but accepted that this was something some women had to endure. At that time, I was not familiar with yoga and its benefits for treating a range of pelvic pain conditions. 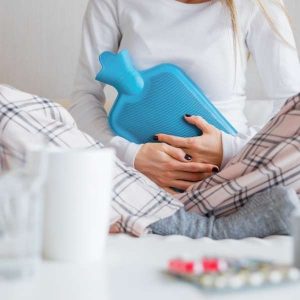 Dysmenorrhea is characterized by cramping in the lower abdominal area during menstruation. Primary dysmenorrhea (not caused by other diseases) affects 60 to 93% of women under the age of 25. Risk factors include: onset of menstruation before age 12, low body mass index, anxiety (increases pain perception), and psychosocial stress. One study showed 66% of young women with dysmenorrhea had limitations in their daily activities due to pain. Another study estimated school absence to be 80 to 93%. Menstrual pain has a tremendous impact on quality of life for otherwise healthy, young women.

A study was conducted in Indonesia with young women ages 14-18 with dysmenorrhea. Subjects with alcohol/drug consumption, high anxiety score, low body mass index, or exercise more than twice a week were excluded from the study. Participants were divided into two groups of fifty. The experimental group was taught yoga techniques and the control group was taught self-tapping exercises to do at home and given a tool to measure pain intensity. Self-tapping involves a rhythmic touch with the balls of the fingers to release tension in body and mind. The yoga group had a statistically significant decrease in their pain. This result was consistent with a 2011 study by Siahaan. The self-tapping group did not demonstrate a significant decrease in pain. This finding differed from another study by Akbar (2015) which showed a positive effect with tapping. The authors concluded that their study confirmed the results of two other studies showing yoga was effective in reducing menstrual pain (Sakuma et al., 2012 and Manurung et al., 2015). The authors also made mention of a 2011 study showing benefits of yoga nidra in reducing pain, gastrointestinal symptoms, cardiovascular symptoms and urogenital symptoms in menstrual disorders.

These findings are consistent with a 2019 meta-analysis that found yoga to have the largest and most consistent benefit of self-care measures for dysmenorrhea. The authors pointed out that yoga’s effect in reducing inflammatory markers not only serves to reduce pain, but may improve distressing mood changes related to menstruation.

I learned from esteemed Canadian physiotherapist and researcher,  Carolyn Vandyken, that dysmenorrhea in girls can be a predictor of pelvic pain in adulthood . Early intervention is key and assessment by a qualified practitioner is indicated. As the Indonesian study showed, yoga is an empowering practice that can be learned and implemented at home. When too much tension or a sensitive nervous system is contributing to pain or other pelvic floor symptoms, yoga is an effective complementary therapy. Yoga is an ancient practice that offers techniques and wisdom for whole-body wellness. I wish I knew then what I know now so I could have helped Lorna with resources and yoga. My hope is that the information I share will raise awareness and avoid needless suffering for women of all ages.

Click here to learn more about my yoga approach and how I can help you,

You can also visit the Mindfulness Resources section to learn about and experience how yoga can help improve both your physical and mental well-being.